In Lululemon’s new video, the retailer highlights activities from surfing to singing and almost everything in-between. The new spot, which runs nearly two minutes in length, excludes the traditional yoga for which the 19-year-old brand is known. Instead, “This Is Yoga” emphasizes how the meditation, breadth and self-discipline learned from yoga translates into other pursuits.

“The irony is that it’s all about yoga,” said Duke Stump, exec-VP of brand and community at Lululemon. “One of our goals was to make it aspirational but both accessible and inclusive so people can see how yoga can be part of their everyday life.”

Rather than spend a lot on advertising, the Vancouver-based brand has traditionally relied on grassroots marketing and word-of-mouth by loyal fans. Such a strategy, of course, could also have the opposite effect as illustrated by Lululemon’s now notorious see-through-pants disaster of 2013. But now, Lululemon is flexing its dollars to include more of a marketing push as the athleisure market grows more crowded and consumers begin to spend less on apparel.

Stump said the new effort is Lululemon’s most-expensive, though he declined to specify how much the campaign will cost.

While Lululemon is doing well financially—the chain raked in $2.3 billion in revenue last year, a 14% rise over the prior year, and posted a same-store sales increase of 6%—it’s still competing in a stretched-out space.

“It will have to contend with the saturation of a slowing athleisure market,” wrote Neil Saunders, managing director of GlobalData Retail, in a recent research note, adding that the year ahead will be challenging for Lululemon. Under Armour recently suffered its first quarterly loss. In addition, Kit and Ace, a high-end line that was co-founded by Lululemon founder Chip Wilson only three years ago, recently said it will be closing all of its U.S. stores.

This is the retailer’s first time working with Brooklyn-based Virtue Worldwide, Vice Media’s ad agency, and its first time working with a creative agency on a project of this scale. The relationship, which came about because Virtue’s global reach fit well with Lululemon’s hopes for expansion, is ongoing, Stump said, noting that Virtue is expected to handle Lululemon’s holiday work.

“When I first met the team from Lululemon, I barely knew what yoga was, but we gelled immediately and collaborated exhaustively,” said Virtue’s founder Spencer Baim.

The new push follows the retailer’s successful holiday campaign “The Air Out There,” which was primarily product-focused.

A lot has been made of print as a dying industry, and with print spend down 20% year-over-year in Q1 2017, the numbers show diminishing power. But B2B print still holds a big piece of the ad budgets with $9.75 billion spent in print for 2016.

Print and digital are on divergent paths, while 24 out of 26 categories saw fewer brands advertising in 2016 compared to the previous year, 17 out of 26 categories saw an increase in number of brands advertising. Brands are becoming more cost-conscious with targeted campaigns on fewer sites/properties that reduce ad waste. The heavyweight print advertisers have reduced the number of publications they place in and the number of brands running print advertisements is down 10%. 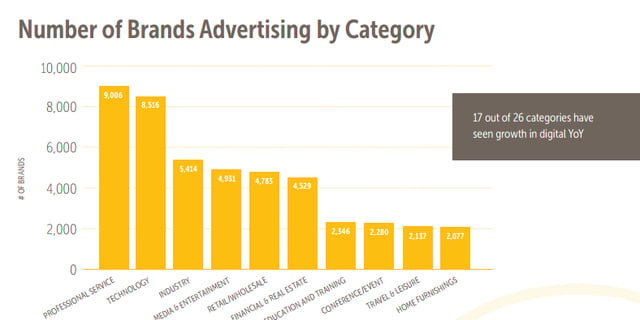 Nonetheless, we would be remiss not to discuss where ad dollars are shifting—to the digital space.

With print advertisers running in fewer and fewer publications, it is increasingly likely that industry leaders will eat up more market share, while smaller publications miss out. It would behoove these publishers to engage proactively with industry trends. Rather than continue to duke it out for a dwindling share in print, why not utilize those resources to expand digital offerings? This would allow publishers to begin building lasting relationships in an expanding digital market.

“TV advertisers have decades of experience with the same modeling, targeting and measurement systems,” Scott Rosenberg, Roku’s svp of advertising, told Adweek. “This service will allow them to follow viewers as they move their TV time.”

According to a recent study, 40 percent of Roku customers have cut or “shaved” the cable cord, choosing to watch their TV via streaming. Additionally, Nielsen data shows fewer and fewer people are watching linear TV.

To Rosenberg, Roku users didn’t necessarily grow up with an allegiance to traditional paid TV service. Instead, they’ve been “willing to innovate and create their own custom bundle or viewing package.”

And media agencies are getting on board.

“We are excited to partner with Roku on this first-to-market opportunity,” said Erica Sperry, vice president of national video investments for Trilia. “As viewing migrates increasingly to OTT platforms, it’s critical for us to help our clients stay in the forefront of this shift in consumer behavior.”

Roku’s audience guarantees will be available for advertisers on Roku’s app as well as within ad-supported services on Roku devices, such as Hulu.

“Roku is pushing the industry forward to adopt verification standards for media buying on OTT platforms,” said Britney Greenhouse, digital media director for Horizon Media. “We have been working together with Roku to pilot the audience guaranteed product. We’ve seen positive match rates with Nielsen which are a good sign.”

Ad-supported content accounts for half of the top 250 most-watched channels on Roku. Rosenberg says consumers are looking for value, “but the ad infrastructure has to work properly to meet their needs.”

“It’s up to us in the marketing field to work harder to be relevant and engaging with consumers,” he said. “Everyone’s an empowered viewer who can choose what to watch and when to watch it.”

Sling TV is getting into programmatic advertising, partnering with Adobe’s newly unveiled Advertising Cloud to let brands bid in real time on livestreaming and video on demand.

The offering, which is expected to be announced later today at the Adobe Summit in Las Vegas, will let marketers bid on Sling’s inventory via a private marketplace. Advertisers will also be able to target audiences on a cross-channel basis using first- and third-party data such as demographics, network and genre.

According to Adam Lowy, general manager for advanced TV, digital and analytics with Sling parent Dish Media, the service will allow digital and television buyers to buy media through the same platform. He gave the example of advertisers who might want to buy ads surrounding coverage of the NCAA.

“An event comes up, and someone says, ‘Oh, I’ve got to get some spots in there; can we get into this?’ You can get in right now,” Lowy said, adding that the updates allow advertisers a way to move away from manual ad buys done one at a time. “And as we go on with events, it really helps with the supply and demand concept. If something is available, boom, we’ll fill it right there.”

The introduction of programmatic advertising could put Sling in competition not just with major networks, but also with tech companies like Twitter, which has been betting on live video for the platform with a string of partnerships with sports leagues and news organizations.

Sling doesn’t have any third-party measurement partners yet. But Lowy said the company is in talks with Nielsen and comScore, and he would like to have deals in place “sooner rather than later.” However, unlike programmatic in social feeds or publisher websites, he said the benefit is having full-screen ads.

While Sling is just now making its programmatic offering available more broadly, it’s been beta testing with advertisers since the beginning of the year. Sling and Adobe wouldn’t say which advertisers or how many have been testing programmatic ads but said consumer-packaged-goods brands have been especially interested in programmatic advertising for live TV and digital video.

Prior to Sling entering the programmatic space, Dish had already started partnering on programmatic inventory with TubeMogul, which was acquired by Adobe in late 2016. According to Keith Eadie, vp of revenue and partnerships at Adobe Advertising Cloud, the convergence of TV and digital video has people thinking of their video buying as a more holistic investment.

“Agencies and brands, some of them are actually even changing their organizations to go to market and investment in the market that way,” Eadie said.

It’s only a segment of a late night talk show, but thanks to YouTube and the whole viral video thing – not to mention ratings hungry “news” and entertainment programs and content-starved celebrity driven Web sites of all kinds – the Carpool Karaoke segments on CBS’ The Late Late Show with James Corden have become a formidable franchise of their own. They are the most reliably engaging part of Corden’s show, in much the same way that the Tea Time Movie, Karnak the Magnificent and Aunt Blabby segments always delivered on NBC’s The Tonight Show Starring Johnny Carson. Or to look at it in streaming terms, Karaoke is to Late Late Show what Comedians in Cars Getting Coffee is to Crackle – its best feature. What is it about famous people letting loose in automobiles that enthralls us so?

Home
What We Do
Happy Clients
Insights
Let's Talk